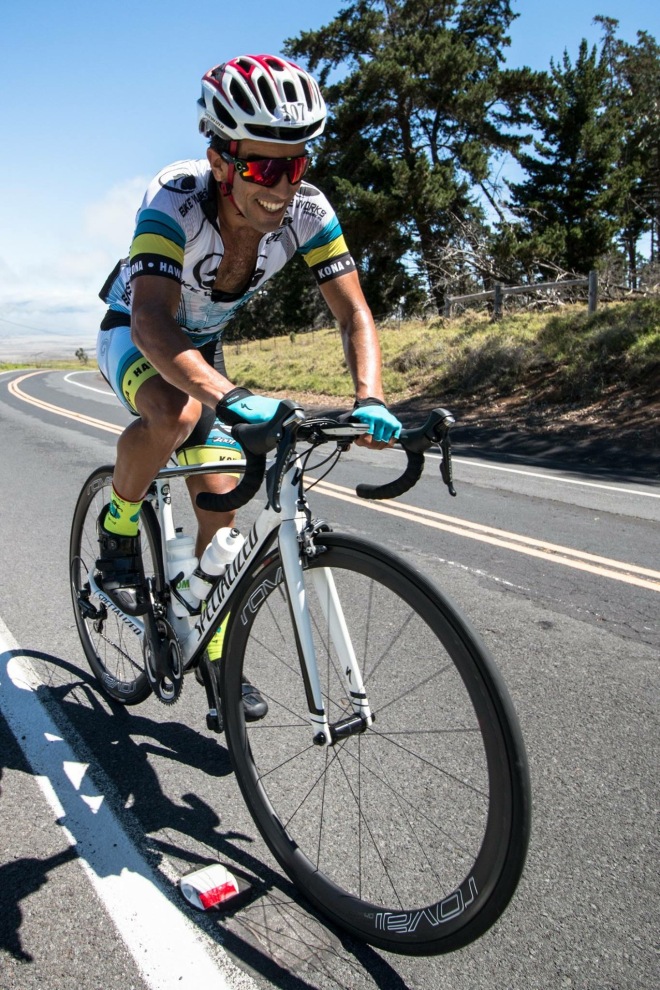 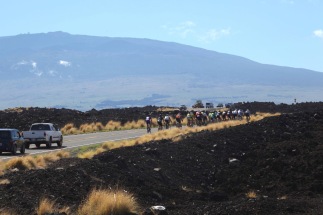 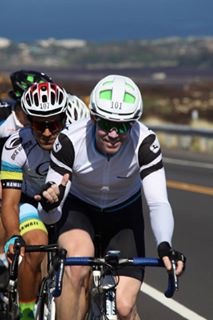 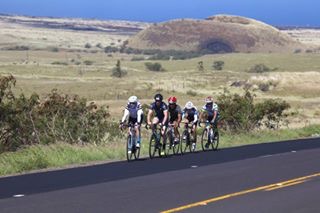 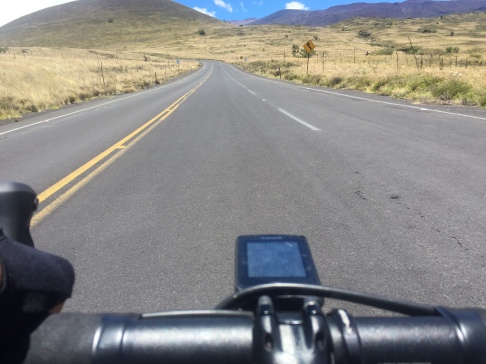 It’s been almost a month now since I raced, but I need to jot this down before it flies away out of my working memory. I’ll try my best to make this one short and “pro-looking.”

The usual suspects were missing aside from the Penn Henderson. Malik Mariano and Luis de la Torre unfortunately were not there to inspire me. An Australian tourist, a Hilo resident, and a Ray Burst of Oahu were there however to push the pack hard. Along with Bree Wee, another guy from Team Boca, Mike Sullivan, Todd Marohnic, and a handful of my Kona friends were there to ride this race created by Gary Shields that was on hiatus since 2012. It was to be a punishing race with virtually all climbing and lots of head winds.

The front pack quickly formed with a good eight of us including Malik’s little brother, Kealakehe High School Senior Majdi Mariano. We pushed it up to Waikoloa Village going pretty strong. I held off from taking the front and tried to stick to my game plan: Copy Penn. That was literally my strategy going in. As long as I don’t cross my threshold power, just copy Penn. Well that went out the window in less than 20 minutes. I was pushing 280w going up that blasted road into the head wind with these guys! What was I thinking.

Eventually there was just five of us: Penn, Hilo, Aussie, Ray, and me. Ray dropped off (wisely) and I soon followed suit. We reuinited at the intersection with the upper highway before turning north to then hit up Old Saddle. Ray told me we had to work together and I happily obliged. The head winds were brutal and the front pack of three were quickly widening the gap. I thought that Penn would surely crack them going up Old Saddle. I was wrong. Ray and I took turns pulling, but I had to let him lead as I was trying to recover from the insane zone five effort from the previous section. My Redbull/water mix was done, my Carbopro/nuun mix was on its way out and my third water bottle was out. I needed a refill. The second aid station came later than we hoped. Ray was magnanimous enough to share his with me. We got some Gatorade from Grant and Janet Miller as they drove by and worked our asses off trying to get to the top. It was my first time riding that road, ever.

Ray got to the top without me. I got dropped. My watts were dropping down to 230w (zone three) and I was hoping to be doing around 225 the whole ride on average. I wasn’t even half way to the top and my heart sank upon this realization. It was a mental anguish I have felt only during marathon running. A quick calculation and fraction manipulation to realize, “what I just did, I have to do again. And then some.” It’s that “and then some,” that really daunted me.

It became survival mode after that. Getting down to new Saddle road was a relief as Bill Ng and I only two weeks prior were joyfully doing intervals up there for some training. I felt a second wind and pushed. I grabbed some more aid at the third or fourth station and pushed on. No one was in sight in front or behind. It was probably chilly, but hard to say when the heart rate is ticking up and up as the body also is climbing up and up Hawaii’s biggest mountain.

The final climb up Mauna Kea Access Road is a true test of enduring suffering. Perhaps that is a privileged thing to say, but the mental anguish of knowing there is only 6 miles to go, but still about 2000ft of climbing really messes with the motivation and reasoning skills. I pondered why I was doing this race. I pondered why I don’t just stop and go home trying to smile. This is where the endurance athlete comes off as an addict. I couldn’t let go, I made it so far, I wanted to get high. So I climbed on. My 39:28 lowest gear ratio was not good enough for the average 16% grade that lied before me. I was mashing for the next hour, standing up and pushing up the hills like I was riding my pedicab up California St. in San Francisco back in the day. The smell of conifers reinforced the elevation. The crisp air reminded me that this was not a dream.

With literally only 0.2 miles to go, something horrific surged through my right quadriceps. My leg seizes. It was a cramp. It felt horrific to me as I have never cramped on my bike before. I’ve cramped in the pool only. I did not know what to do on the bike climbing an 18% grade. I got off and grabbed my leg. My breathing rate spiked and I felt panicky. I didn’t know what to do and I could picture the chasers rounding that previous turn any second now. I got back on and rode perpendicular to this steep road to try to get going again. It hurt, but I moved. I found my way. The hurt dissipated as I saw the finish line and a gathering of volunteers from the Hawaii Cycling Club. There it was. I ended with a smile, but my body was crushed.

I ended up getting 5th overall. Penn Henderson, the favorite, apparently cramped out and shut down a few miles from the top and took a DNF. Hilo and the Aussie got second and third respectively. Ray Burst? Remember his wisdom of falling off the front pack the earliest out of us five? Well that paid off as he did not end up cramping as opposed to his runner ups. That was when he passed them actually—they were cramping on the side of the road.

I had tons of electrolytes the night before and the day of. I had plenty of water throughout the race. I ate a small but healthy breakfast. What causes these cramps? People have theories, but the science is still not determined. Some think the whole salt and water thing is not the answer that has long been suspected. Pete Jacobs, who eats a strict diet, told me about the specifics of his all natural, simple caloric intake. He was telling me that it’s about finding the right types of sugar and removing all else. He especially made note of the accumulations of inflammatory foods that slow us down in training, digesting, recovering and racing.

I believe the cramps were simply from riding the hardest bike race of my life. Riding almost 10,000ft of elevation in one go only over about 50 miles is nothing I have done before. I’ve climbed over 10k in one ride (see SF-Arcata Ride), but that was over the course of 172 miles! The relentless work my muscles were doing must have hit a tipping point. Or maybe I just need to end my race with Redbull instead of starting it with it!

If you get a chance next year, I highly recommend this race. It will test you and strengthen you. You will get to see and feel the island of Hawaii like never before. You’ll gain a new respect for our majestic Mauna Kea and Mauna Loa too. You’ll also get to see how charitable and well-organized the Hawaii Cycling Club is!

Last thing, thank you Bike Works for the awesome setup and letting me borrow those Roval CLX40s They were like hot knives through volcanic butter. Thank you also to Christine and Andy Cross for helping out a few of us riders along the way with aid. That beer at the end was pretty great (try a beer after climbing 9000ft!). Brandon Franco and John Bason–your pictures are amazing. Thank you for capturing this day! Lastly, thank you Hawaii Cycling Club for putting this on and having so many volunteers to help out a race that not very many people would eve r want to do (understandable). The post-race banquet was delicious. The certificate and check was awesome too. Thank you for being the first race-organization to ever have awarded me with cash for my placement! I want to frame it like the liquor store owners do who frame their first earned dollar bill behind the counter. 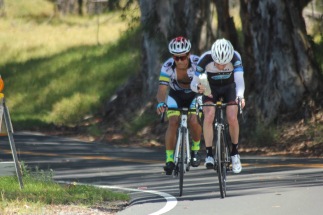 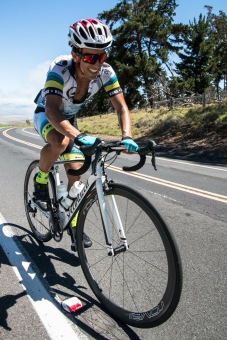 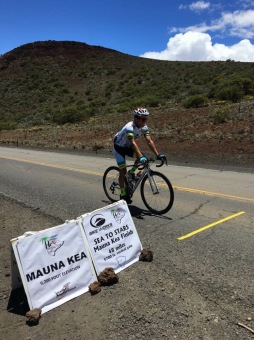